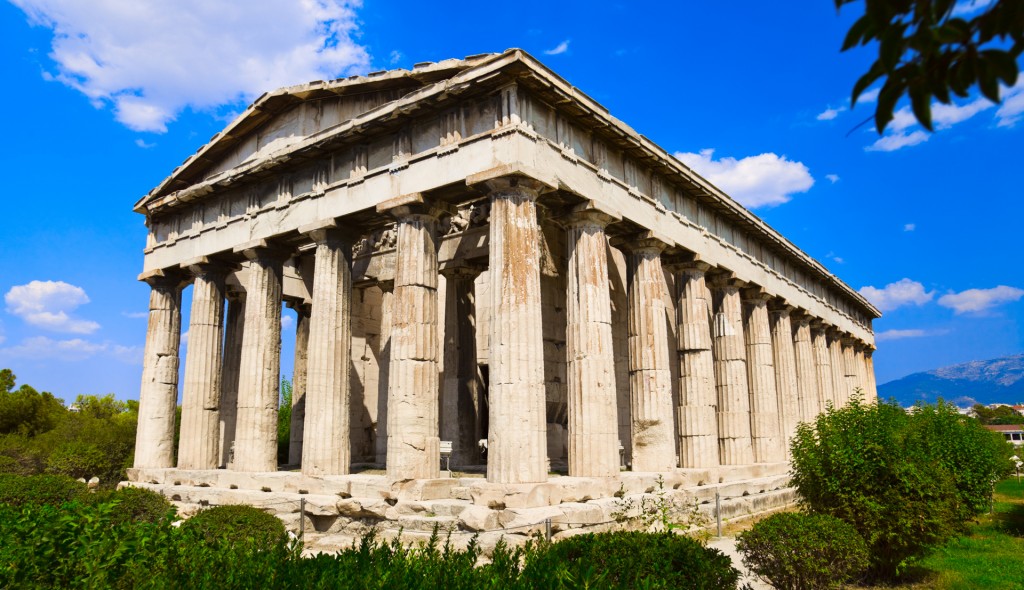 The Agora was the heart of ancient Athens, the focus of political, commercial, administrative and social activity, the religious and cultural centre, and the seat of justice.
The site was occupied without interruption in all periods of the city’s history. It was used as a residential and burial area as early as the Late Neolithic period (3000 B.C.). Early in the 6th century, in the time of Solon, the Agora became a public area.

After a series of repairs and remodellings, the Agora reached its final rectangular form in the 2nd century B.C. Extensive building activity occured after the serious damage made by the Persians in 480/79 B.C., by the Romans in 89 B.C. and by the Herulae in A.D. 267 while, after the Slavic invasion in A.D. 580, the site was gradually abandoned. From the Byzantine period until after 1834, when Athens became the capital of the independent Greek state, the Agora was again developed as a residential area.

The first excavation campaigns were carried out by the Greek Archaeological Society in 1859-1912, and by the German Archaeological Institute in 1896-97. In 1890-91, a deep trench cut for the Athens-Peiraeus Railway brought to light extensive remains of ancient buildings. In 1931 the American School of Classical Studies started the systematic excavations with the financial support of J. Rockefeller and continued until 1941. Work was resumed in 1945 and is still continuing. In order to uncover the whole area of the Agora it was necessary to demolish around 400 modern buildings covering a total area of ca. 12 hectares.

In the 19th century the four colossal figures of Giants and Tritons at the facade of the Gymnasium were restored by the Greek Archaeological Society. In the years 1953-56, the Stoa of Attalos was reconstructed to become a museum and in the same period the Byzantine church of Aghioi Apostoloi, built around A.D. 1000, was restored by the American School. Between 1972 and 1975, restoration and preservation work was carried out at the Hephaisteion; the area was cleared of the vegetation, and the roof of the temple was repaired in 1978 by the Archaeological Service.