Greece To Update Tourism Agreement With Iraq Signed 33 Years Ago 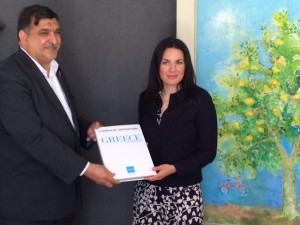 Greek Tourism Minister Olga Kefalogianni has agreed to update a tourism agreement between Greece and Iraq that was signed back in 1981.

The announcement came following a meeting in Athens on 5 May between the Greek tourism minister and Liwa Smaysim, the Iraqi Minister of Tourism and Antiquities.

During the meeting, bilateral issues were discussed such as visa facilitation and the possibility of launching an Athens – Baghdad – Erbil air connection in the future.

On his part, Mr. Smaysim informed on the political developments in his country (elections in Iraq) and the increase of tourist arrivals to Iraq due to development works that have taken place in recent years.

Major Tourism Investments On Greek Islands Get The Go-Ahead