Chinese Newlyweds Get A Taste Of Cretan Hospitality 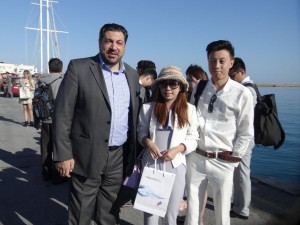 Heraklion Port Authority President Ioannis Bras with one of the Chinese newlywed couples.

Sixteen Chinese couples that got married recently in the annual “Rose Wedding” (*) ceremony that took place this year on Crete, were introduced to the island’s famous hospitality during a farewell ceremony held in their honor by the Heraklion Port Authority.

The Chinese couples tied the knot on 25 April at the Koules fortress in Chania, Crete, and then embarked on a week-long honeymoon that included visits to Rethymnon, Agios Nikolaos and Heraklion.

During the Minoan-style farewell ceremony, the authority’s president, Ioannis Bras, personally gave his wishes to the newlyweds along with gift souvenirs from Crete.

“The ties of friendship between Greece and China are known and the selection of our island for the Rose Weddings is the best promotion for Crete and Greece,” Mr. Bras said in an announcement. 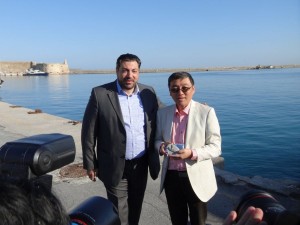 Heraklion Port Authority President Ioannis Bras and the head of the “Rose Wedding” group that traveled to Crete.

According to the authority’s president, theme tourism is the right approach to a mature and modern tourism industry that seeks greater benefits through diversification, specialization and superior services and not through mass and cheap tourism.

The Heraklion Port Authority actively participates in efforts to attract visitors from new countries-markets such as Russia, Israel and China, in collaboration with relevant government agencies and the Region of Crete.

(*) “Rose Wedding” is a large-scale theme wedding ceremony of the Shanghai Tourism Festival, established by the Shanghai Municipality Tourism Bureau and the Municipality of Huangpu. It has held more than 10 theme wedding ceremonies in China and abroad since its establishment in 1998. According to reports, every time the Rose Wedding takes place in a destination, it creates a stir in public with its unique style and innovative ideas.