Shanghai Couples Come To Greece To Get Married In Group Ceremony 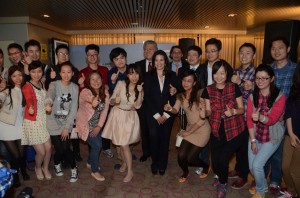 Sixteen Chinese couples will be married in the annual “Rose Wedding” ceremony, Shanghai’s most famous mass wedding, chosen to take place this year on Crete, Greece, on Friday 25 April.

“Rose Wedding” is a large-scale theme wedding ceremony of the Shanghai Tourism Festival, established by the Shanghai Municipality Tourism Bureau and the Municipality of Huangpu. It has held more than 10 theme wedding ceremonies in China and abroad since its establishment in 1998. According to reports, every time the Rose Wedding takes place in a destination, it creates a stir in public with its unique style and innovative ideas.

For this year’s “Rose Wedding” ceremony, 16 Chinese couples will tie the knot at the Koules fortress in Chania, Crete, and then embark on a week-long honeymoon that includes visits to Rethymnon, Agios Nikolaos and Heraklion. The Aegean honeymoon will wrap up with a visit to Santorini in the Cyclades group.

The mass ceremony will be filmed and screened during the Shanghai Tourism Festival and is expected to boost tourist arrivals to Greece. 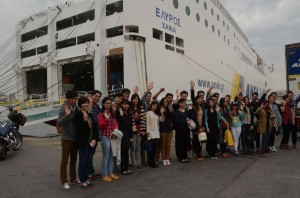 The 16 Chinese couples before boarding the Elyros ship and traveling to their wedding destination: Chania, Crete.

On 23 April, prior to their journey to Crete via the Elyros, ANEK Lines hosted an onboard special Cretan welcome event while the ship was docked at the Piraeus Port.

During the welcome event, the Chinese couples had the opportunity to sample Cretan delicacies and tsikoudia and were entertained with live music and traditional Cretan dances. The Chinese couples were also informed on Cretan wedding traditions.

The welcome event onboard the Elyros ship was attended by the Greek Tourism Minister, Olga Kefalogianni; the Chinese Ambassador to Greece, Zou Xiaoli; the secretary general of International Economic Relations of the Hellenic Ministry of Foreign Affairs, Panagiotis Michalos; and the Heraklion Port Authority’s president, Ioannis Bras.

European Port Officials To Meet In Piraeus, Greece, In June 2014