Kefalogianni To Promote Greece In Land Down Under 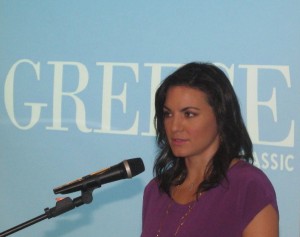 Tourism Minister Olga Kefalogianni is expected to make an official visit to Australia in May to promote Greek tourism, the media in Greece said recently.

According to Greek press reports, Mrs. Kefalogianni is expected to visit Melbourne on 12 and 13 May, Canberra on 14 May and Sydney on 15 and 16 May.

While in Australia, the Greek tourism minister’s agenda is said to include meetings with Australian tourism professionals, the Greek Community of Melbourne and the Hellenic Australian Chamber of Commerce and Industry (HACCI).

The Greek media reported that Mrs. Kefalogianni is expected to sign the much-awaited deal between Greece and Australia that will allow young people (18-30 years) to obtain a tourist visa and travel between both countries to live and work for up to 12 months.

According to official figures, tourist arrivals from Australia to Greece in 2013 increased by 9.6 percent and the Greek tourism sector expects even a bigger increase this year. Last year Greece welcomed 142,642 tourists from Oceania, of which 129,112 came from Australia.