The Muppets Take Over Lufthansa

Miss Piggy and Kermit on board with Lufthansa 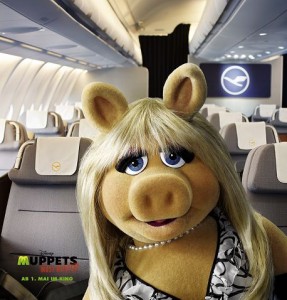 Lufthansa is embarking on the next round of its partnership with Disney following the film Planes, this time with Miss Piggy and her sweetheart Kermit appearing in the in-flight entertainment program in time for the German premiere of Muppets Most Wanted on 1 May.

Under the slogan Join the Muppets. With Lufthansa., the carrier is presenting the new Disney film with a broad-based on- and offline campaign and is thereby continuing to establish itself as a family-friendly airline. This not only means that Lufthansa passengers of all ages get to enjoy the global premiere on board an airliner on 1 July. Muppets fans can also look forward to plenty of fun and prizes before, during and after their trip.

Taking off with the Muppets

Just in time for the Easter holidays, Lufthansa employees will be handing out Kermit and Miss Piggy sleep masks to passengers at the hubs in Frankfurt and Munich. 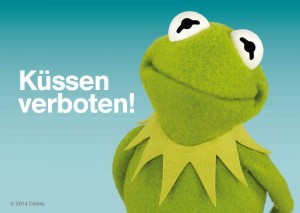 During the flight, younger passengers can look forward to Muppets presents and the in-flight entertainment includes the feature film The Muppets to get all Muppets fans in the mood for the new Muppets Most Wanted.

During the school holiday period in April and May, the Muppets will also be the main attraction at the family check-in desks in Frankfurt and Munich, besides the passengers, of course.

Win a trip to Los Angeles!

On LH.com/muppets there are three exciting online games to be played, each presented by a character from the film. They will bring the Muppets cult back to life again, because players will be able to interact virtually with their favourite characters.

In addition to all the fun and games, Lufthansa also has plenty of prizes to be won. First prize is a trip for four people to Los Angeles with a visit to the Disney film studios – including flight, hotel accommodation and car hire.

Miss Piggy, on board in Business Class, prepares viewers for the film in her own inimitable way. The trailer will also be shown in a slightly adapted version on Lufthansa’s in-flight entertainment before the Muppets films.