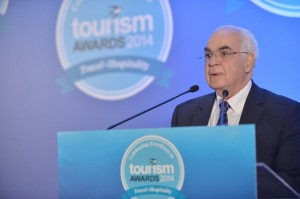 The best practices and most innovative initiatives in the Greek tourism industry were honored on 8 April at the Tourism Awards 2014 ceremony in Athens.

The Tourism Awards 2014 were launched to promote excellence and innovation in the fields of travel, hospitality & leisure.

The event took place at the Divani Apollon Palace & Thalasso and was attended by over 350 senior executives from leading Greek tourism enterprises, agencies and organizations.

Nominations were evaluated by an independent committee consisting of eminent Greek and European university professors and representatives of professional bodies and associations.

To see the whole list of winners, press here. 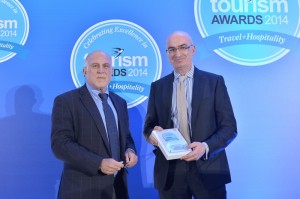 The president of the Hellenic Chamber of Hotels, Yiorgos Tsakiris (right), accepted the honorary tourism award for the chamber’s “Greek Breakfast” project.

Honorary awards were also given to deserving individuals and institutions for their contribution to the promotion and development of the Greek tourism industry:

The Tourism Awards 2014 were organized by publishing company Boussias Communications and Hotel & Restaurant magazine and held under the auspices of the Greek Tourism Ministry and the Greek National Tourism Organization.

GTP was the communication sponsor of the event.