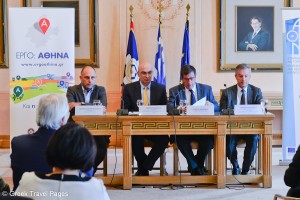 The Municipality of Athens will launch a series of actions to upgrade the Greek capital’s tourism product and promote the city’s services. Seven million euros will be invested in these actions, which are scheduled to run until 2015.

During a press conference at City Hall on 9 April, it was announced that part of the municipality’s actions will be carried out in cooperation with the Association of Greek Tourism Enterprises (SETE) and the Hellenic Chamber of Hotels, under a budget of two million euros.

The mayor of Athens highlighted that tourism has great importance for the city, its economy, its development and its work force. “Every visitor that chooses Athens as a destination, either for recreation or business, is an asset that we are obliged to respect and protect,” Athens Mayor Giorgos Kaminis said.

Mr. Kaminis referred to the strategy of the Athens Development & Destination Management Agency, which is based on four pillars: the upgrade and enrichment of the tourism product of Athens,  tourism management, the promotion of the city’s tourism product and the further strengthening and reorganization of the Greek capital’s official tourism body, the Athens Convention & Visitors Bureau.

According to the mayor, initial data for 2014 shows that tourism in Athens is taking a turn for the better. In the first quarter of this year, arrivals to the Greek capital increased by some 32 percent (429,549 visitors against 324,634 in 2013).

SETE’s president, Andreas Andreadis, expects Athens to attract 700,000 extra arrivals this year, bringing the total number of tourists in the Greek capital in 2014 up to one million.

Greek Tourism Expected To Soar With More Flights In 2014