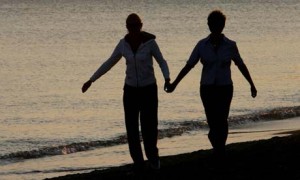 Two women on the beach at Lesvos. Photograph: Teri Pengilley

The Association of British Travel Agents (ABTA) recently included the Greek islands of Mykonos and Lesvos among the top honeymoon spots for lesbian, gay, bisexual, and transgender (LGBT) couples.

ABTA released the list of “long established LGBT destinations” following the legalization of same sex marriage in England and Wales on 30 March.

On Greece ABTA says: “Greece and its glorious islands are the spiritual home of LGBT culture. You’ll feel like you’ve come home.”

The LGBT destinations also include Brighton, Miami, Sydney, San Fransisco and newer favorites Puerto Vallarta and Tel Aviv. ABTA has also identified up and coming destinations such as Montpellier in France and Florianopolis in Brazil.

According to ABTA, some 7,000 same sex couples are expected to enter into a civil partnership each year.