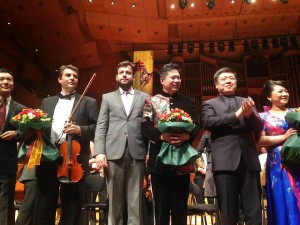 Some 2,000 Athenians felt the charm of Chinese music and also may have become a bit more eager to travel to Beijing and experience the city’s unique culture, after attending a recent concert that connected China to Greece at the Megaron Athens Concert Hall.

The concert was entitled “Melody from Beijing” and united two renowned Chinese virtuosos of traditional Chinese musical instruments, Zhou Wei and Yang Jing, with the City of Athens Symphony Orchestra. This was the first time the Chinese and Greek artists coexisted in a concert.

The event included traditional and modern Chinese music as well as transcriptions of famous works of Western music, linking the East with the West. 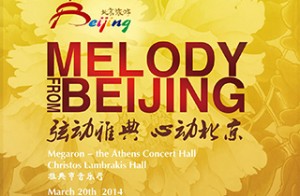 The concert was organized by the Beijing Municipal Commission of Tourism Development in cooperation with the Municipality of Athens and the Embassy of the People’s Republic of China in Greece.

According to the organizers, the concert was the first event in a series of cultural events under planning aimed to bring the two cities closer.

Prior to the concert, the Beijing Municipal Commission of Tourism Development and officials from Athens had a meeting and discussed ways to attract more Greek tourists to Beijing and also increase the number of Chinese visitors to Athens.