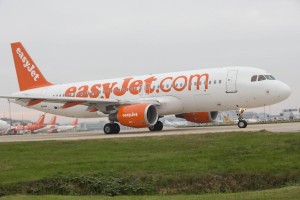 Low-cost carrier easyJet has announced that it will launch nine new routes to and from Greece this year in an attempt to broaden its activity and investment in the Greek market.

The nine new routes, which take the total number easyJet serves to 63 (or a 15 percent increase), will have a corresponding increase in seat capacity of 20 percent over those of 2013.

The new air routes are expected to result to the transfer of more than two million passengers to and from Greece in 2014.

According to an announcement, with the launch of the new routes, easyJet further strengthens the connection of major European markets with popular tourism destinations in Greece and will attract more visitors. The airline announced that 54 percent of the available seats will be for the UK market, 25 percent for the Italian market and 12 percent for the German market.

“Since 1998, when easyJet launched its activity in Greece, it has maintained steady growth by offering more and more connections to major European tourism markets in 12 cities/destinations,” Stefanos Vakirtzis, regional ground operations manager of easyJet, said.

“With our concerted action, we remain diligent in our commitment to promote Greek tourism,” he added.