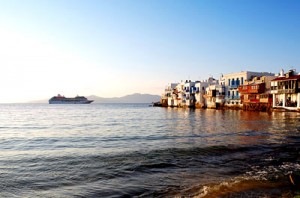 Last year may have been a record year for Greek tourism, but that does not mean that all of the industry’s financial problems are suddenly over, a study by real estate valuation firm GLP Values has revealed.

According to the study conducted during the November-December 2013 period, as many as 125 hotels have been put up for sale on 19 island destinations in Greece. These are mainly medium-sized units that were put on the market in late 2013. The combined price for the sale of all 125 hotels adds up to 378.5 million euros. Most hotels are being sold at prices up to three million euros.

Some of the hotels up for sale are located on some of Greece’s most popular islands such as Rhodes, Corfu, Santorini, Mykonos and Crete.

However, despite the plethora of options, the study showed that the supply surge is not met with commensurate demand, a factor that leaves an obvious impact on the selling price of the units.

Among hotels in Greece up for sale are three units located on the islands of Corfu, Crete and Rhodes that belong to the same hotel chain. The three hotels have a capacity of 310 to 380 rooms each and an average occupancy rate of 80 percent. Their sale would add up to a total of 90 million euros.

A hotel located in Lindos, Rhodes, with 146 deluxe rooms, is also up for sale for the price of 30 million euros.

According to market experts, in most cases, most interested buyers expect prices to drop further while international hotel groups focus mainly on undertaking the management of local hotel units.

Initiative Launched For The Restoration Of Important Monuments On Kefalonia Island