Aegean Airlines To Give Away Free Tickets To Greek University Students 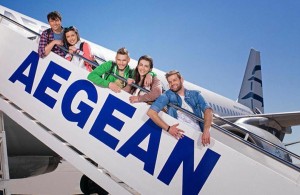 Greek carrier Aegean Airlines announced on 20 March that it will give free airline tickets to 250 students that have been accepted in a Greek University away from their place of residence in Greece.

The airline’s new student support program “Close to the young” is open to all students that have passed the Greek university entrance exams for the academic year 2013-2014.

A total of 250 students will each receive eight free airline tickets per year for the entire four- or five-year course of study.

The free airline tickets are eligible for 100 new students that are from remote areas of Greece  (Astypalea, Zakynthos, Ikaria, Kalymnos, Karpathos, Kassos, Kastelorizo, Kythira, Leros, Milos, Naxos, Paros, Skiathos, Skyros, Syros) and for 150 new students from the rest of Greece. 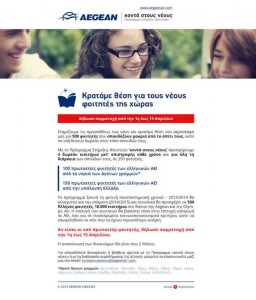 The criteria to join the program are mainly socioeconomic as the company aims to lighten the financial burden of many Greek families.

Information on the terms, conditions and documentation required for participation in the program can be found on the program’s website www.kontastousneous.gr as well as on www.aegeanair.com and www.olympicair.com.

Students may submit their online applications and supporting documents through the website www.kontastousneous.gr from 1 to 15 April 2014.

The names of the students entitled to free airline tickets will be announced on 2 May 2014.