Greece To Show Best At MITT 2014 Expo In Russia 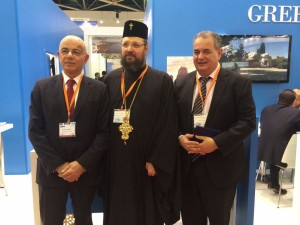 Greece will show its best as a welcoming, safe and favorite international tourism destination during the days of the Moscow International Exhibition Travel & Tourism (MITT) in Russia.

At this year’s MITT, the Greek National Tourism Organization (GNTO) is representing Greece in an area of 800 square meters and hosting 60 Greek exhibitors.

In a bid to strengthen religious tourism, the GNTO is hosting the Church of Greece in a special area at the stand.

Many Greek events are expected to take place during the exhibition.

The general secretary of the Greek Tourism Ministry, Anastasios Liaskos, and the secretary general of the GNTO, Panos Livadas, are present at the exhibition. Their agenda includes scheduled meetings with Russian officials and influential members of the Russian tourism industry.

Both general secretaries will give interviews to Russian mass media and specialized magazines and inform on Greece’s tourism policy and the country’s comparative advantages.

Bookings from Russia to Greece were down 20 percent in the first two months of 2014 compared to the same period last year, the president of the Association of Greek Tourism Enterprises (SETE), Andreas Andreadis, told Greek newspaper Kathimerini.

Mr. Andreadis attributes the shortfall in bookings mainly to the sharp devaluation of the ruble against the euro and less to the dispute between Russia and Ukraine.

According to SETE’s president, so far, bookings to Greece have been made by one in five Russians that are expected to visit the country this year.

Greece Will Continue To Offer Efficient Visa System To Russians