Although Greek company Hellenic Seaplanes is ready to begin constructing waterways in ports in Greece, the slow-moving process to obtain a license for their construction may put plans on hold for the 2014 tourism season, according to the president and CEO of Hellenic Seaplanes, Nikolas Charalambous.

Since last year, the company has held very positive meetings with the Ministry of Mercantile Marine and local authorities throughout Greece to create waterways at the country’s ports.

According to reports, Hellenic Seaplanes already has received approval to operate between the popular Ionian Sea island of Zakynthos, the western port of Patras, the northwestern island of Corfu and the central port of Volos, serving neighboring islands including Skopelos.

Whenever Greece does actually develop seaplane activity, the country’s tourism is expected to benefit. This alternative mode of transport will allow access to remote Greek islands and strengthen the transport of Greece’s border areas.

In addition, such investment is expected to increase growth on Greek islands, create jobs and boost the real-estate market. 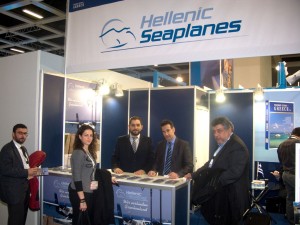 Hellenic Seaplanes participated in the ITB Berlin international tourism exhibition and met with representatives of major tour operators. The professionals agreed that the launch of seaplane routes would play a very important role in a long-term strategy for Greek tourism.

According to Hellenic Seaplanes, the German tour operators believe that Greece’s goal to extend the tourism season is feasible provided that local communities and seaplanes companies seeking to operate in Greece would work together.

The Greek Tourism Ministry and the Greek National Tourism Organization support the launch of a seaplane network in Greece.

At ITB Berlin, Greek Tourism Minister Olga Kefalogianni had a brief meeting with the company’s management and discussed the contribution of seaplane routes to the country’s tourism.