Greece To Promote Religious Tourism At MITT 2014 Expo In Moscow 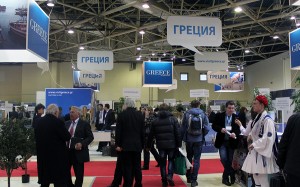 In a bid to strengthen religious tourism, the Greek National Tourism Organization (GNTO) will host the Church of Greece in a special area in its stand at the Moscow International Exhibition Travel & Tourism (MITT) that will take place 19-22 March in Russia.

At MITT 2014, the GNTO will represent Greece and accommodate more than 60 exhibitors in a 1,000 square meter stand. Many events aimed to highlight the Greek tourism products and businesses are planned to take place at the GNTO’s stand.

The general secretary of the Greek Tourism Ministry, Anastasios Liaskos and the secretary general of the GNTO, Panos Livadas, will depart for Moscow on 18 March to accompany the GNTO’s participation.

During their stay in Moscow, they will have meetings with Russian officials to discuss the expansion of tourism cooperation between the two countries, which already stands at an excellent level.

Mr. Liaskos and Mr. Livadas will also hold meetings with representatives of the Russian tourism market and leading tour operators.

They will also give interviews to foreign media outlets to boost Greece’s image in the Russian market.