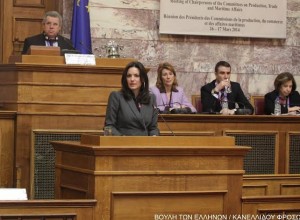 Greek Tourism Minister Olga Kefalogianni gave a speech in Parliament today, 17 March, on the power of “Blue Growth,” a key driver of tourism development for Greece and other countries of the South within an integrated maritime policy of the European Union.

Mrs. Kefalogianni was informing Parliament on the outcome of the Informal Meeting of EU Tourism Ministers that recently took place in Athens.

During her speech, the Greek tourism minister highlighted the particularly encouraging messages she received from Greece’s European partners on the country’s tourism potential.

“The European partners recognize our efforts to transform the Greek tourism sector from a low policy sector to an engine of recovery,” she said.

Mrs. Kefalogianni also pointed out that Europe understands that tourism is a very serious issue; an issue that needs structured interventions and initiatives at both European and national level.

More into her speech, she said that an integrated maritime policy of the EU is one of the Greek Presidency’s main priorities. 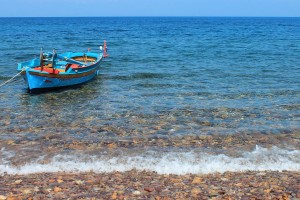 The EU’s blue economy represents 5.4 million jobs and a gross added value of just under 500 billion euros per year.

Coastal and maritime tourism is the biggest maritime sector in terms of gross added value and employment and is expected to grow by 2-3 percent by 2020. Cruise tourism alone is expected to create 100,000 new jobs by 2020 compared with 2010.

Employing over 3.2 million people, the coastal and maritime tourism sector generates a total of 183 billion euros in gross added value and represents over one third of the maritime economy.

Cruise passengers carried worldwide in 2014 is forecast at 21.6 million, a three percent increase over 2013. By 2018, 24.1 million cruise passengers are expected to sail globally; 58.8 percent of those will originate from North America and 27.2 percent from Europe.

Greece To Promote Religious Tourism At MITT 2014 Expo In Moscow