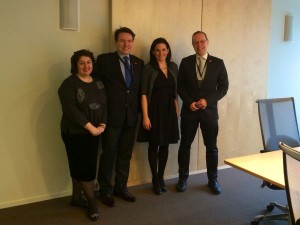 Greek Tourism Minister Olga Kefalogianni held a meeting with the administration of the Norwegian Tourist Board, Innovation Norway, on 14 March, the second day of her official visit to Oslo.

During the meeting, issues of common interest were discussed such as the regulatory framework for the operation of Innovation Norway, ways to promote tourism products and services and the promotion of Norway’s destinations.

The discussion focused on the common features of Greece and Norway (such as an extensive coastline and the existence of several regional airports) that influence tourism development and for which specific actions are required.

It is noted that Innovation Norway focuses largely on modern online tools and social media – a strategy that the Greek National Tourism Organization has adopted recently.

Interest was also expressed for the further development of specific forms of tourism (cruise) and boosting tourism in overseas markets (Brazil, China, etc.).

Earlier in the day, the Greek tourism minister, accompanied by Greek Health Minister Adonis Georgiadis, held joint meetings with the heads of Missions for overseas patients at the Oslo University Hospital, the administration of Diakonhjemmet hospital and the treatment center for Norwegian patients with rheumatic diseases. The Greek ministers also held talks with a leading medical tourism facilitator.