“Air Transport News honors for the third consecutive year the leader companies in the major categories of the air transport industry elected based on a democratic procedure. I want to congratulate all the winners for their achievement,” the managing director of Air Transport News, Dr Kostas Iatrou, said.

The Air Transport News Awards are the only international prizes that honor all main categories of the air transport industry. 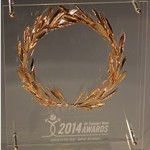 The award consists of a 24K gold-plated olive tree wreath inspired with the prize given to Olympic Games winners in Ancient Greece.

Winners were chosen by a combination of more than 4,200 votes from Air Transport News readers and the verdict of a jury of internationally known industry experts. The jury, many of whom hold executive positions in the air transport industry, carefully examined the profile of each of the finalists in each of the 14 categories before reaching its final verdict.

In particular, the winners by category are as follows: