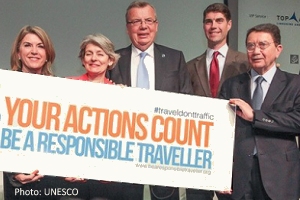 The World Tourism Organization (UNWTO), the United Nations Office on Drugs and Crime (UNODC) and the United Nations Educational, Scientific and Cultural Organization (UNESCO) have joined forces to promote a global campaign urging travellers to support the fight against a number of forms of trafficking. The Campaign was presented to the tourism sector during the recent ITB international tourism exhibition in Berlin, Germany.

“Your Actions Count – Be a Responsible Traveller” aims to raise awareness about the most common illicit goods and services that tourists might be exposed to while travelling. The campaign provides guidance to recognize possible situations of trafficking in persons, wildlife, cultural artefacts, illicit drugs and counterfeit goods, and invites travellers to take action through responsible consumer choices.

“Tourists are global citizens and with over one billion tourists travelling the world each year they must become a force for good,” said UNWTO Secretary-General Taleb Rifai during the launch of the campaign.

“Making the right ethical choice as consumers reduces the demand for illegal products and contributes to preserve natural and cultural assets that form an invaluable part of the heritage of the communities and people we visit,” he added. 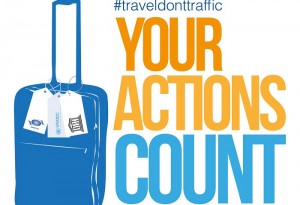 “They are usually unaware that these ‘souvenirs’ may be stolen heritage – ripped away from their original settings, illegally excavated from archeological sites… Their loss can inflict great damage and sorrow on their rightful owners, for whom such items are an intrinsic part of their cultural identities and values,” she said.

“Your Actions Count – Be a Responsible Traveller” will contribute to the UN’s goal of combating organized crime as well as upholding the UNWTO Global Code of Ethics for Tourism.

The campaign launches with the support of Marriott International and Sabre Holdings, the first tourism companies to partner in the campaign, promoting this important message among their millions of customers.

Campaign site: Your Actions Count – Be a Responsible Traveller