“Our main goal is to extend the tourism season of Crete as the island can support various forms of tourism outside the main season, such as medical tourism, agritourism and wine tourism,” the Region’s governor, Stavros Arnaoutakis, told GTP during the ITB tourism exhibition in Berlin.

Crete is expecting a 10 percent increase in arrivals this year, following an 18 percent rise in 2013, which was considered a record year for the island with some 3.3 million arrivals. Most tourists came from Russia (505,000) and Germany (495,000) followed by the UK and France.

“We are open all year around” 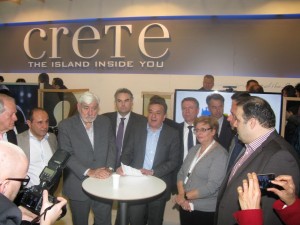 During the ITB exhibition, the Region of Crete presented its new tourism identity to a Greek and international audience. The launch of the new logo follows a series of ongoing promotional actions at the region’s stand to promote Crete as a quality destination, ideal for visits all year around.

According to the region, whoever visits the island in March or April, even in October or November, will discover an almost untouched, green land full of surprises and experiences that include new trekking and cycling routes, family hotels in the countryside, olive oil and wine tasting.

Crete is supported by the participation of local professionals at its stand at ITB. For the first time, the island’s hoteliers, travel agents, entrepreneurs, local producers and wine-makers stand united and represent the island all together.

Mr. Arnaoutakis told GTP that the four prefectures of Crete – Chania, Heraklion, Lassithi and Rethymno – from now on will participate in international and Greek exhibitions in that form: united.

“Through this cooperation we want to give the world a dynamic display of what the destination has to offer,” the governor said.

Naxos, Greece, As Seen Through The Eyes Of An American Journalist