Greek Museums, Sites To Operate On Extended Hours This Season

33 Greek museums & sites will be open until 8pm, seven days a week

Thirty-three of Greece’s most popular museums and archaeological sites will extend their hours from this April, according to the Greek Culture Ministry.

More specifically, as of 1 April, 33 out of 117 sites and museums will remain open from 8am to 8pm, seven days a week. 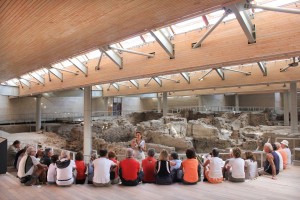 According to data, last year 12 million tourists visited Greece’s museums and archaeological sites out of the total 17.8 million who came to the country for vacation.

The 33 sites selected to offer extended hours this season cover 95 percent of those visits and include the Acropolis in Athens, Ancient Olympia in the Peloponnese, Knossos in Crete, Spinalonga in the Gulf of Elounda (north-eastern Crete), the Archaeological Museum of Thessaloniki, the Royal Tombs of Aigai (Vergina) and Akrotiri in Santorini (photo).

Greece is expected to draw a record number of more than 18.5 million tourists this year.

ITB 2014: Greece To Present Kefalonia To The World

Athens To Host High-Level Conference On Coastal And Maritime Tourism