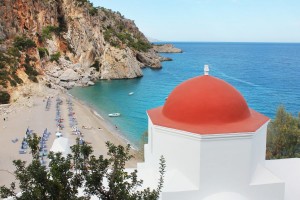 Greek destinations are expected to see bookings by German travelers up by 52 percent this summer, compared with the same period in 2013, according to a recent report by GfK market research group.

“This is the largest increase compared to other tourism destinations… Greece will celebrate a great comeback,” GfK said.

The massive increase in bookings improves Greece’s place on the list of popular destinations for German travelers, as the country now comes up third behind Spain and Turkey.

Similar are the findings of German newspaper Die Welt. In a recent report on the most popular destinations of the Germans, the newspaper noted that “after a reduction in demand in 201, as a result of the political turmoil, bookings for Greece are recording a positive trend for all tour operators.”

Die Welt even commented that due to high demand, tourists that are planning to holiday in Greece “need to hurry and find a bed.”

Commenting to the newspaper on the subject, the head of FTI group, Dietmar Gunz, said 2014 will “not be the year of late bookings” for Greece as it will be the first country to be “full” of tourists this year.

In addition, GfK’s report menioned that by the end of January, on a general scale, German travelers had already spent 4.4 billion euros to book holidays, an increase of eight percent compared with the same period in 2013.

Santorini, Greece, Is One Of The Most Photogenic Spots On Earth