Ancient Athens As Seen By A German Traveler 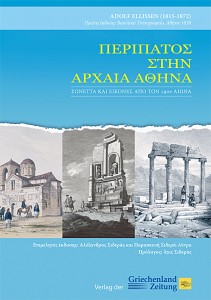 The Greek translation of a German-language book that tells the story of ancient Athens through the eyes of a German traveler has been released by the publishing house of Griechenland Zeitung newspaper in Greece.

In “Walking in ancient Athens – Sonnets and images of the 19th century,” German Adolf Ellissen tells of his experience in 1837, the year when he traveled from Göttingen to the then new Greek capital that was counting some 20,000 residents.

In an enthusiastic tone, Ellissen revives the ancient sights of Athens: the Acropolis, the Tower of the Winds, the theater of Dionysus.

The book contains drawings and photographs of the time , as well as excerpts from Ellissen’s personal diary that refer to his stays in the Greek capital city (1837-1838 and 1860).

According to the publisher, the book is considered a “tour guide” to ancient Athens, a city that still maintains its power to this day.