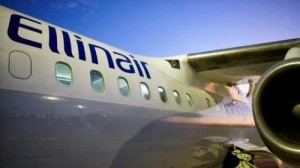 They were welcomed at the city’s airport by owners Mouzenidis Group, while Thessaloniki Metropolitan Anthimos held a blessing ceremony by the aircraft, a four-engine RJ85.

Mouzenidis plans to run two such airplanes from Thessaloniki and expects to add an A319 airbus, to be based on Corfu island in western Greece.

The travel group, which runs 70 offices in Russia, the Ukraine and other Eastern European cities, brought half a million tourists to Greece from Russia and Eastern Europe and, based on current reservations, expects to surpass that number this year, Ellinair CEO Ioannis Mouzenidis told ANA-MPA. About half of them usually head for northern Greece and Chalkidiki peninsula (including Mt. Athos).