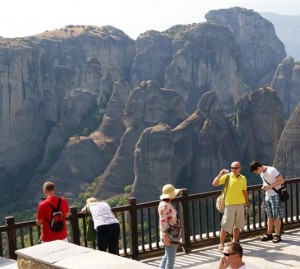 German tourists are expected to travel in large numbers to Greece this summer, as the country remains among the most popular tourism destinations for the German market, senior officials of TUI Germany said during the travel giant’s annual suppliers meeting held recently in Athens.

The representatives from the travel giant’s German branch said arrivals to Greece from Germany are expected to record a double-digit growth rate this year.

Last year, 2.246 million German tourists visited Greece, up 7.7 percent compared with 2012, which was a year of decline as arrivals from the German market dropped by 5.7 percent (2,085 million tourists).

During the meeting in Athens, TUI Germany’s representatives presented the company’s strategy for 2014 that includes travel product diversification and investing in digital technology. Some 100 Greek hoteliers/partners attended the meeting.

New promotion program in the works

According to Greek newspaper Kathimerini, TUI Travel Plc will team up with the Greek National Tourism Organization (GNTO) this year to create a program to promote and advertise Greece as a holiday destination in 12 European countries where the group is active.