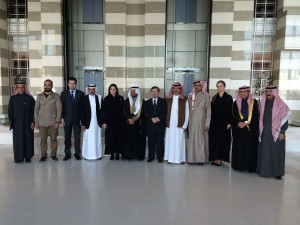 Greek Tourism Olga Kefalogianni (fifth from left) during her meeting with the Saudi Arabia Chamber of Commerce.

A Greek-Arab Investment Forum will take place in Athens, Greek Tourism Minister Olga Kefalogianni and the Saudi Arabia Chamber of Commerce agreed on 10 February during a meeting held in Riyadh. Mrs. Kefalogianni is currently on a three-day official visit to the capital city of Saudi Arabia.

During the meeting, the Greek tourism minister referred to major reforms that have taken place recently in Greece and invited Arab entrepreneurs to invest in the country. “There are now conditions for business openings and investments, both in the tourism sector and in other sectors of the Greek economy,” she said.

Members of the Saudi Arabia Chamber showed a particular interest in medical and health tourism in Greece and requested Greek expertise on issues relating to tourism education and training.

During the meeting, the possibility of launching direct flights between Athens and Riyadh via a private airline company was widely discussed.

According to the Greek Tourism Ministry, the establishment of such an air link would help boost arrivals from Saudi Arabia to Greece.

Earlier, Mrs. Kefalogianni attended a meeting with the governor of Riyadh and discussed issues of bilateral relations.