3rd General Assembly of the Hellenic Chamber of Hotels

Greece’s Prime Minister Antonis Samaras referred to Greek tourism as the first “steam engine” that was “put into gear” and began to pull the whole economy out of a painful recession. 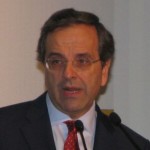 “Slowly other sectors will follow since tourism has multiplier effects everywhere and horizontally in all aspects of economic activity,” he said in a greeting read during the 3rd General Assembly of the Hellenic Chamber of Hotels that took place on 7 February.

Mr. Samaras expressed the belief that tourism would remain at the forefront in the future and emphasize on quality upgrading, synergies that can be launched with other sectors and alternative markets.

The PM praised the country’s tourism performance in 2013 and indicated that 2014 could be a landmark year for Greek tourism.

“We will seek to highlight the dynamics and importance of tourism for the whole of Europe,” he added referring to the Greek Presidency of the council of the European Union.