2013 was a year of a spectacular recovery for tourism in Greece, according to data on last year’s developments in global and Greek tourism announced during the 3rd General Assembly of the Hellenic Chamber of Hotels. The data was processed by the Research Institute for Tourism (ITEP) and the Documentation Center For Greek Tourism. 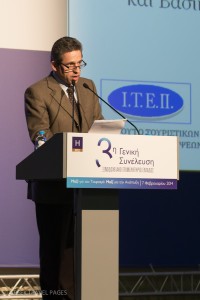 Europe remains the main source of arrivals for Greece at a rate of 88 percent. However, arrivals from Europe dropped slightly in 2013 compared with 2012, while visitation numbers from Asia and the United States showed an increase.

Arrivals from China increased by over 160 percent, from Russia by 54 percent and from Turkey by 35 percent.

ITEP noted that compared to competitor countries, Greece fared the best with Turkey and Portugal following.

The data also showed that hotel capacity has increased by 23 percent from 2000 until today. During the crisis period 2009-2013, 914 new hotels (63.392 beds) opened in Greece, 73 percent belonging within the three highest categories. During the same period, 613 units closed down (34.480 beds). Only some three percent were included in the three highest hotel categories.