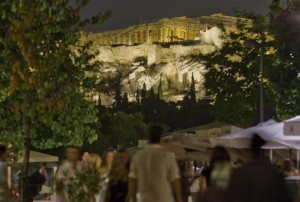 2014 may be considered a “year of recovery” for Athens International Airport (AIA) in terms of passenger traffic since 150 new weekly flights are scheduled to connect the Greek capital with international destinations.

The start of the winter season (November 2013 – March 2014) found Athens airport with 31 new weekly flights (compared to the same period 2012-2013) scheduled to operate all year around.

Overall for 2014, according to reports, there is an increase of seating capacity particularly from Aegean Airlines and other companies-some 1.2 million seats for international flights. That figure does not include Ryanair’s announced 900,000 seats for summer 2014 of which 75 percent will cover the domestic market.

The low cost airlines flying to Athens this summer will increase to 17 from 12 last year, reports said

Destinations served by low cost carriers will increase by 40 percent (from 25 to 35) as 17 airlines will connect 35 cities (39 airports) to the Greek capital. Low cost carriers will now represent 29.3 percent of all companies operating scheduled flights to/from Athens.

The 150 new weekly flights to/from Athens concern the following destinations and will be carried out by the respective airline companies: