Greek travel agency MidEast Travel & Tourism has been named “selected partner” to the Holy Synod of the Church of Greece, following a competition among Greek tourism enterprises.

The company was distinguished for its services and quality of products, but mainly for its deep knowledge and experience in the field of Religious Tourism.

MidEast organizes numerous tours and excursions, for both domestic and inbound tourists, to monasteries and sites throughout Greece that carry a special significance for the Christian faith.

During these excursions, visitors are informed on the important role of the Byzantine Empire, Christianity and Orthodoxy in the country’s history and later developments. 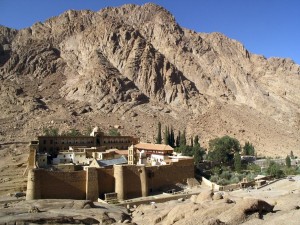 Saint Catherine’s Monastery lies at the foot of Mount Sinai in Saint Katherine city in Egypt. The monastery is Greek Orthodox and is a UNESCO World Heritage Site.

The company also organizes visits to holy places and to monuments of other Christian countries such as its annual travel package to the Greek Orthodox Monastery of Saint Catherine at the foot of Mount Sinai in Egypt.

Mideast specializes in Pilgrimage Tourism and has run a series of guides dedicated to shrines across Greece and neighboring countries that describe their history and importance for Orthodoxy. The series is composed of three publications in three languages (Greek, English and Russian) and has received an award by the Hellenic Association of Travel & Tourist Agencies.

“Our aim is to highlight the cultural and ecclesiastical wealth hidden in Greece and other Christian countries and to strengthen pilgrimage tourism, always in cooperation with the Holy Synod of the Church of Greece,” MidEast’s owner, Katerina Mousbeh, said.