A350 XWB To Take Center Stage At Singapore Airshow 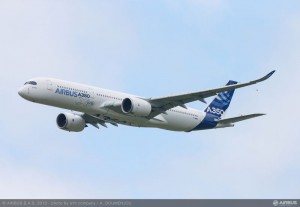 Airbus will present the all-new A350 XWB at the Singapore Airshow next month, marking the first full display of the aircraft at an international air show. The flight test aircraft participating in Singapore will be MSN 003, which will be on static display 11–12 February and will also take part in the flying display on both days.

The A350 XWB is the world’s most modern mid-size widebody and is currently at an advanced phase of its flight test program, with entry into commercial service set for the fourth quarter of this year. The aircraft’s participation at Singapore will enable visitors to get a close-up look at the aircraft both on the ground and in the air, with a flying display that will demonstrate its maneuverability, sleek design and exceptionally low noise levels.

Featuring an extra-wide cabin and non-stop flying capability of up to 8,250 nautical miles, the A350 XWB will be especially well suited to the needs of Asia-Pacific airlines flying to Europe and North America. Carriers from the region that have already ordered the aircraft include AirAsia X, Air China, Asiana Airlines, Cathay Pacific Airways, China Airlines, Hong Kong Airlines, Japan Airlines, Singapore Airlines, SriLankan Airlines, Thai Airways International and Vietnam Airlines.

According to Airbus, to date, firm orders from the region for the aircraft already total 244, representing 30 percent of total A350 XWB sales. To date, 812 A350 XWB have been ordered by 39 customers worldwide.

Ryanair Announces New Routes From Greece To Norway And The UK