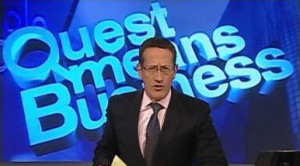 UNWTO has awarded CNN’s Richard Quest the 2013 UNWTO Award for Lifetime Achievement, in recognition of his work as a business journalist reporting on the tourism industry.

The award recognizes Mr. Quest’s reporting across the globe on CNN, which has showcased the challenges and successes of the tourism industry – raising it into the mainstream of the international agenda.

“Richard’s reporting has always recognized the tourism sector’s critical role in the global business agenda…His long-standing commitment to reporting on tourism as part of his broader business remit has helped shed light on the full range of socio-economic activity that powers the sector,” UNWTO Secretary-General, Taleb Rifai, said.

The UNWTO Award for Lifetime Achievement was presented during the UNWTO Awards Ceremony, held on 22 January 2014, during the International Tourism Trade Fair (FITUR) in Madrid, Spain.