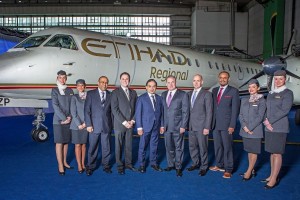 Established in partnership with Etihad, the new carrier will be operated by Switzerland’s Darwin Airline, which is headquartered in Lugano with a major hub in Geneva.

Etihad Regional currently offers year round flights to 15 destinations in Europe using a fleet of 10 Saab 2000 turboprop aircraft. By mid-2014, this will more than double to 34 destinations.

The network of the new airline will include seven European gateways served by Etihad Airways: Geneva, Amsterdam, Paris, Düsseldorf, Belgrade, Zurich (commencing in June 2014) and Rome (commencing in July 2014). 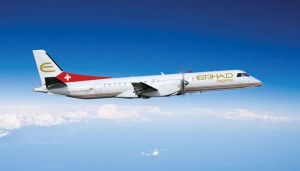 Etihad Regional’s new livery will adorn all 10 aircraft in the fleet by the end of June 2014.

Etihad Regional network will connect with airberlin in Berlin, Düsseldorf and Zurich, providing onward connectivity to destinations in Europe and North America.

The partnership also makes provision for a phased approach to introducing codeshare agreements, subject to regulatory approval. In phase one Etihad Airways will place its EY code on 16 routes operated by Darwin Airline.

The airline will also acquire 49 percent of Air Serbia in January 2014.

Together, Etihad Airways and the seven airlines serve nearly 400 unique destinations with a fleet of more than 500 aircraft. In 2013, they carried a combined total of more than 80.5 million passengers.