An exhibition dedicated to the sea and its timeless relationship to the Greeks, through 92 ancient masterpieces and 22 works of contemporary art, will open at the Brussels Musée des Beaux Arts (Bozar).

Titled “Nautilus, Navigating Greece,” the exhibition is the highlight event of a multidisciplinary program focused on Greece that the Bozar has planned to coincide with the Greek presidency of the European Council.

The exhibition will be on display from 24 January 2014 to the end April.

With the sea as a connecting thread, the exhibition is structured around six themes – Ecologies, Maritime Routes, Odysseys, Hegemony, Ecumene, Faith – bringing to the fore the interplay between nature, culture, identity, adventure, politics, religion and most of all mobility in all its forms – migration, travel, trade etc. 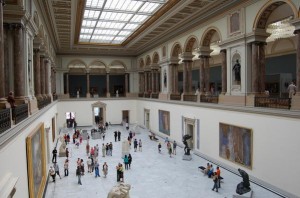 On display there will be 92 ancient artefacts (bronze and marble sculptures, frescoes, coins, vases and ceramic vessels) spanning from the Cycladic (3000 B. C.), Minoan and Mycenaean to the archaic, classical and Hellenistic periods, ending with the Greco-Roman world (200 AD). These artefacts, from about 30 Greek museums, including the National Archaeological Museum, the Acropolis museum and the Museum of Cycladic Art, will co-exist on display with 22 works of contemporary art including photographs, paintings, and video art, in a virtual conversation between antiquity and the modern world.

Events in Brussels also include a series of parallel events linked to the exhibition hosted in several of Bozar’s halls:
– A “Mediterranean-Desert,” concert for piano and video, by George  Koumentakis, 26 January 2014
– A Greek Cinema-Tribute to young directors
– A Tribute to Greek literature

TIME: Can Privatization Save the Treasures of Ancient Greece?