The value-added tax (VAT) charged on Greek passenger ferry tickets may be reduced soon, according to an announcement made by Merchant Marine Minister Militadis Varvitsiotis.

Mr. Varvitsiotis made the announcement while attending the Hellenic Chamber of Hotels first meeting of the new Board of Directors. During the meeting, he focused on a series of issues concerning the Greek maritime and coastal sector.

In regards to establishing adequate ferry connections between the Greek islands, Mr. Varvitsiotis said access to all islands of the country would be covered through the restructuring of existing routes for the benefit of non profit lines.

On Greek ferry schedules for 2014, he said all routes have already been approved by the ministry and therefore can be made public at any time for the information of tourists.

Mr. Varvitsiotis also mentioned that a series of bureaucratic entanglements for the mooring of yachts in Greece would be removed through a new legislative framework for yachts prepared by the ministry. 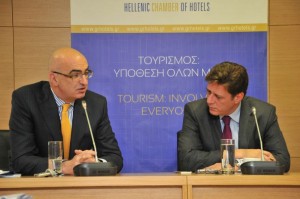 On the issue of waterways, he said the ministry has completed the necessary legislative framework for their operation in Greece and expects seaplane companies to take interest in developing routes in the Greek waters.

Referring to the Piraeus Port, Mr. Varvitsiotis said it would be one of the largest cruise hubs in the world after the completion of the planned port construction.

He also added that the ministry has increased the manpower of coast guards on the islands that have become known entrance points of illegal immigrants.

It is reminded that the main priority under Greece’s Presidency of the Council of the European Union is to focus on the initiative of the European Commission to set up an EU Strategy on the “Challenges and Opportunities for Maritime and Coastal Tourism in the EU.” This aims to promote sustainable economic growth and enhance the overall competitiveness of the maritime and coastal tourism sector.