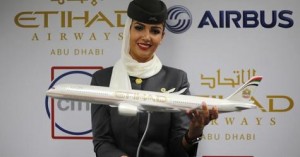 Etihad Airways, the national airline of the United Arab Emirates, is celebrating a year of record-breaking success after achieving its highest ever passenger and cargo volumes in 2013.

Bangkok was once again the airline’s busiest route, with a total of 742,759 passengers flying to Thailand’s capital city in 2013, a year-on-year increase of seven percent.

Etihad Airways carried 73 percent of the more than 16.4 million passengers who traveled through Abu Dhabi airport in 2013. With the addition of the airline’s equity alliance partners that operate flights into Abu Dhabi, the combined total rises to 79 percent of passenger traffic at Abu Dhabi airport.

Impressive cargo growth was also reported, with 486,753 tonnes of freight and mail flown by Etihad Airways last year, a staggering increase of 32 percent compared to 2012 volumes. The airline accounted for 89 per cent of cargo imports, exports and transfers at Abu Dhabi airport last year.

In addition, six destinations were introduced to Etihad Airways’ network in 2013, with new services launched to Washington DC in March, Amsterdam in May, Sao Paulo and Belgrade in June, Sana’a in September, and Ho Chi Minh City in October.

Contest: Emirates And Real Madrid Search For Their Ultimate Fan