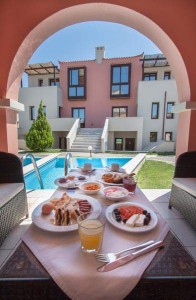 Launched in 2010, the Greek Breakfast program is an initiative designed to promote and establish the country’s gastronomy through Greek hotels and this way contribute to the enrichment of Greece’s tourism product.

Spyrou Hotels has enroled in the program and certified its three-star Rigas Hotel and five-star Skopelos Holidays Hotel & Spa. The two hotels have been provided with the Greek Breakfast quality seal and include Greek products and many recipe ideas based on local Greek Island dishes on their breakfast menus.

Through the program, the hotels join the effort to highlight the Mediterranean Diet and local products of Skopelos such as honey, plums, oil, cheese (included in the island’s famous spiral cheese pie), sweets and wine for which the island has been famous for since antiquity.

“Spyrou Hotels wants to contribute to the total experience of tourists while they enjoy the local culinary wealth and attract more hoteliers to do the same on beautiful Skopelos,” the group said in an announcement.

According to UNESCO, the Mediterranean Diet is not just a modern dietary trend but is an “intangible cultural heritage of mankind.”

Aegean To Connect Hamburg With Athens In May 2014