South Aegean Islands Greeted Most Visitors To Greece In September 2013 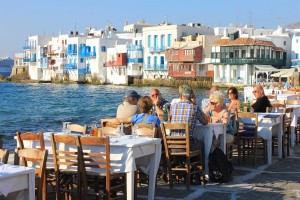 The Region of South Aegean was dubbed “champion” in terms of tourism arrivals and revenue for the month of September 2013, according to a recent survey conducted by the Hellenic Chamber of Hotels and TNS ICAP-Quantros.

This past September, tourism receipts in the South Aegean – that includes the Cyclades and the Dodecanese – added up to 588.2 million euros (out of 1.75 billion euros in the whole country). During that period, Greece welcomed 2.96 million tourists, which adds to 16 percent of annual arrivals and 14 percent of annual revenue.

The average expenditure per visit amounted to 590.3 euros and the average cost per night to 80 euros.

International visitors to the islands of the South Aegean and Crete stayed for nearly eight days and spent 742 euros and 673.5 respectively during their stay.

Guests of the Ionian islands stayed for the same period of time but spent much less during their stay (some 564 euros).

Through the survey, the Hellenic Chamber of Hotels aims to provide new levels of information on Greek tourism, useful to the country’s tourism policy. By analyzing the tourism expenditure of each Greek region, the chamber will present complete statistics on incoming tourism at the end of the year that can assist in the planning of the most appropriate tourism strategy for each of Greece’s 13 regions.