Οnly six percent of hotels in Greece are branded but, due to their comparatively larger size, they represent 21 percent of the rooms in the country, according to the recently released Hotel Brands Report of GBR Consulting. 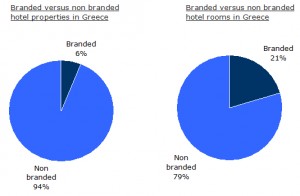 According to the report, the dominance of tour operators in the Greek hotel market is also reflected by the fact that travel giants TUI and Thomas Cook are in the first and third position among all brands on the basis of room count, the former offering 9,211 rooms in 42 hotels and the latter 2,956 rooms in 23 hotels, most of which are 4- and 5-star properties. The second place is taken by national brand Mitsis Hotels with 5,334 rooms, also mainly with 4- and 5-star properties.

Among non-tour operator brands, the stongest presence is by Starwood with 2,301 rooms in 11 hotels, all 5-star properties, while international brands such as Hilton, Intercontinental, Marriott have very limited presence – while the last one recently announced its withdrawal from its only hotel in Greece. 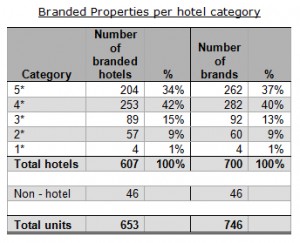 Considering the penetration of the various categories, 5-star hotels/rooms are branded by 58 percent/69.7 percent, the 4-star hotels by 20.2 percent/35.5 percent, while penetration rates in the lower categories are considerably lower.