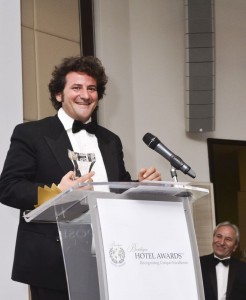 The Poseidonion Grand Hotel on Spetses shined at the 2013 Boutique Hotel Awards held recently at the Marble Arts Hotel in London, UK.

The Poseidonion Grand Hotel has been a landmark on the Spetses skyline for a century with an architecture echoing hotels of Côte d’Azur style.

The hotel first opened in 1914 and was the brainchild of Sotirios Anargiros, a visionary benefactor responsible for much of the island’s development. Following a meticulous five-year restoration program it reopened its doors in 2009 to welcome new and returning visitors from Greece and abroad.

In view of the new season and the celebrations for its 100th anniversary, the Poseidonion Grand Hotel promises many surprises for its guests.