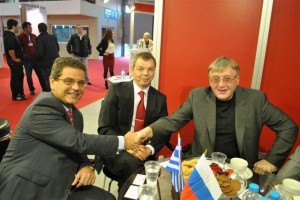 Greek exhibition and conference organizer TIF–Helexpo signed a Memorandum of Cooperation with Russian exhibition agency EUROEXPO, on the sidelines of the recent 29th Philoxenia exhibition in Thessaloniki.

The memorandum aims to strengthen the relations of the two exhibition organizers through participation in tourism exhibitions held in Russia and Greece.

Intourmarket will take place 15-18 March in Moscow, Russia, with over 1,300 exhibitors from 140 countries and all of Russia’s regions. The exhibition attracts over 75,000 visitors and is considered one of the major international tourism fairs.

OTDYKH Leisure Moscow 2014 will take place 16-19 September in Russia. The tourism fair covers an area of 22,000 square meters and gathers 1,500 exhibitors, of which 800 are Russian professionals and 700 are from some 70 countries. Thirty Russian regions will attend the fair and the trade visitor count is estimated at 62,000.

TIF-Helexpo will also participate in the Romanian tourism exhibition TTR taking place 13-16 March 2014. The exhibition is organized in Bucharest by Romexpo twice a year, in autumn and spring. This year’s spring TTR gathered 275 exhibitors from 75 countries and attracted over 30,000 visitors.