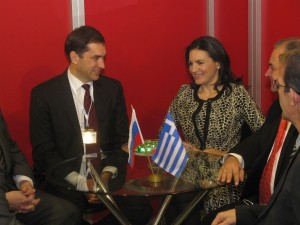 The deputy head of the Federal Agency for Tourism of the Russian Federation, Evgeny Pisarevsky, with Greek Tourism Minister Olga Kefalogianni at Philoxenia.

Russia is participating in this year’s Philoxenia International Tourism Exhibition in Thessaloniki, Greece, after several years of absence.

“Russia is turning a new page for the tourism relations between both countries,” Greek Tourism Minister Olga Kefalogianni said during the inauguration ceremony of the 29th Philoxenia exhibition on 21 November.

Mrs. Kefalogianni added that the country’s participation in the exhibition launches significant opportunities and also contributes to the further strengthening of Greek-Russian relations.

“Soon the results of this presence will be seen by everyone,” she said. 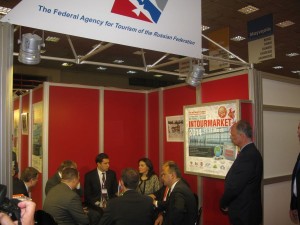 It is reminded that a Joint Action Plan on tourism cooperation for the 2013-2015 period was signed last month in Moscow between the Greek tourism minister Olga Kefalogianni and the Russian Federation’s head of the Federal Agency for Tourism, Alexander Radkov, and deputy head, Evgeny Pisarevsky.

Recently released data has shown that in the first nine months of 2013, Russian arrivals exceeded the number of Russian visitors over the whole of last year.

According to the Greek general consulate in Moscow,  during the January-September 2013 period, the number of visas issued to Russian citizens to visit Greece jumped by 57.5 percent compared with the first nine months of 2012 and amounted to 881,990.