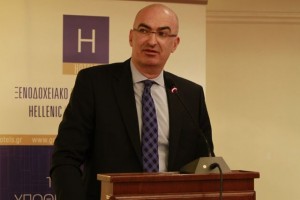 “The Hellenic Chamber of Hotels has been serving Greek hoteliers and Greece for over 78 years, selflessly and consistently. The chamber belongs exclusively to its thousands of members who are too important to simply be absorbed by self-appointed ‘saviors,'” the chamber’s president, Yiorgos Tsakiris, said in an announcement.

The suggestion by the Union of Hellenic Chambers was included on a list of proposals handed over to Greek Tourism Minister Olga Kefalogianni by the union’s president, Konstantinos Michalos.

The union’s proposals were said to aim for “a better performance of the Greek tourism product” and the best possible benefits for Greek society and entrepreneurship.

According to the chamber’s president, rumors had surfaced in regards to the closure of the Hellenic Chamber of Hotels. “The instigators and orchestrators of the – until now – secret discussion have been revealed,” he added.

Mr. Tsakiris stressed that the whole hotel industry would go against any discussion of eliminating the chamber.

On its part, the Hellenic Federation of Hoteliers in an announcement referred to self-appointed “saviors” and “experts” on issues that concern Greek tourism and its future.

The federation is represented by the Hellenic Chamber of Hotels in its relations with the State.

In the announcement, the federation makes it clear that the Greek hotel sector has no room for new “professionals” that recklessly suggest “solutions” and intervene on institutional and specific issues.

“We serve and respect dialogue and always welcome discussions on proposals for tourism that are documented, innovative, creative and based on developing partnerships and synergies… Anything else is evidently not on the same wave length,” the federation concluded.

Athens Gets a “Taste” Of Marseille At Sofitel

Thessaloniki To Get More Tourism Promotion Next Year