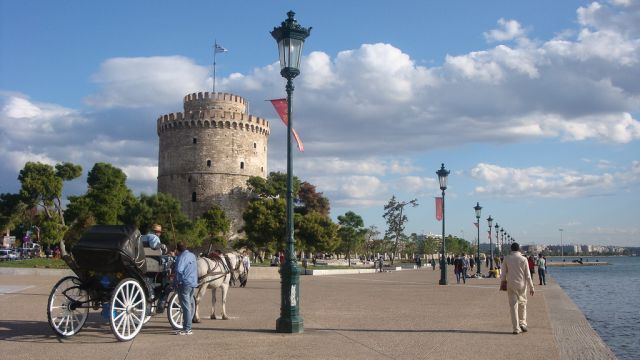 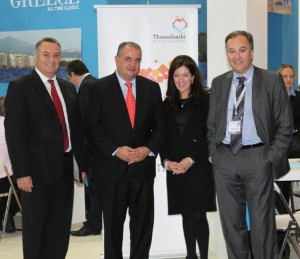 Renowned UK author Victoria Hislop spoke in regards to everything about Thessaloniki that has inspired her and continues to inspire her, during a presentation of the Northern Greek city held by the Thessaloniki Hotels Association during the recent World Travel Market (WTM) in London, UK.

Thessaloniki was Ms. Hislop’s inspiration for her third bestselling novel “The Thread,” which describes historical events that occurred in the city from 1917 until the modern era.

During the presentation of Thessaloniki, Ms. Hislop spoke to an audience of foreign journalists and tour operators and shared her personal experiences from her visits to the city.

“Thessaloniki has a soul. What happens in this city is hard to describe in words if you have not visited,” Ms. Hislop told journalists who inquired about the advantages of destination.

The author referred to everything that has enchanted and inspired her, including the people, the sunset, the deep sea front and the food. 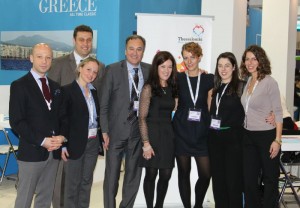 The president of the Thessaloniki Hotels Association Aristotelis Thomopoulos (fourth from left) with Victoria Hislop at the association’s stand. They are accompanied by the association’s vice president, Konstantinos Alexopoulos; Board members, Evelyn Christopoulou and Mihalis Chryssochoidis; Dimitra Voziki and Christina Kalogera from the GNTO UK; and the association’s marketing head, Evdokia Tsatsouri.

The Thessaloniki Hotels Association participated in WTM 2013 with its own stand within the pavilion of the Greek National Tourism Organization (GNTO) and held a number of pre-scheduled meetings with leading international tour operators.

According to the association’s president, Aristotelis Thomopoulos, the “messages” this year are quite positive for Thessaloniki.

“We will break even on last year’s losses and eventually close the year with a positive sign and this strengthens our optimism for 2014,” Mr. Thomopoulos said in an interview with Indian channel Global News Network.

In 2013, British visitors to Greece showed an upward trend of 15,517 overnight stays during the January-August period, up 8.87 percent over last year.