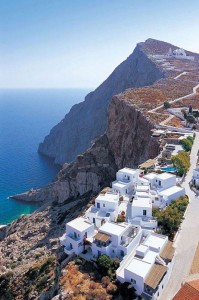 Greece’s small island in the Aegean Sea, Folegandros, is one of the seven islands singled out by CNN and included on a list of “Europe’s most beautiful villages.”

CNN: Folegandros in the Cyclades has the whitewashed beauty of Santorini but not the crowds

“Santorini’s streets sag with admirers, but on Folegandros, a nearby island in the Cyclades, you’ll find similar architecture—streets paved in slate, whitewashed buildings decorated with colorful flowers, the occasional Greek Orthodox church with a bright blue dome—without the crowds. For a secluded swim, trek to Katergo, a sheltered stretch of beach where gentle, emerald-blue waves lap the pebbly shore.”

Folegandros, together with Sikinos, Ios, Anafi and Santorini, forms the southern part of the Cyclades.

Kefalogianni: “Tourism Can Lead Greece Out Of The Crisis”