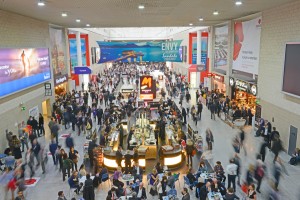 Marketing Greece President Andreas Andreadis and members of the new private entity’s board of directors, Andreas Stylianopoulos and Agapi Sbokou, met with members of leading British and international media outlets (such as Travel Weekly, Conde Nast Traveller, The Guardian, The Observer, Wanderlust and Travel Channel) and discussed the progress of and prospects for Greek tourism.

2013 has proven to be an exceptionally successful year for Greece’s tourism sector, with significant increases in key indicators, including an estimated total arrivals figure of 17.5 million, a record for the country. Tourism revenues for January-August rose 13.7 percent compared with the corresponding period in 2012.

Marketing Greece noted the existence of a powerful dynamic which has seen a 10 percent increase in early bookings for 2014, indicating that Greece is already well-positioned for the year ahead in comparison with its competitors. 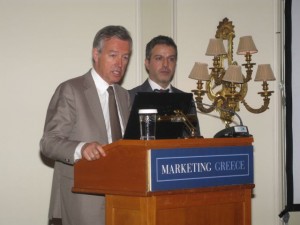 “The Marketing Greece team’s goal is to effectively promote Greece as a leading global destination. To this end, we are implementing a very specific plan of action in target markets, the results of which are already evident,” Andreadis said.

Media attending WTM have shown particular interest in Greece’s national strategy for tourism development through 2021, with which Marketing Greece’s objectives are fully aligned.

Mr. Andreadis noted that the key goals of this plan involve an increase in annual arrivals to 22-24 million, average expenditure per visitor of 800 euros and direct revenues totalling 33 billion euros. “If these goals are achieved, tourism will contribute 20 percent of Greece’s gross domestic product,” he said. 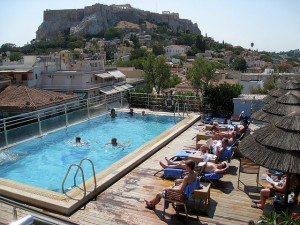 In response to questions as to how these goals would be achieved, Marketing Greece representatives noted that, for the first time, Greece has adopted a very specific strategic plan for tourism development and, at the same time, is promoting a brand new portfolio of travel experiences divided into six thematic axes: sun and sea, conference tourism, city breaks, cultural tourism, nautical tourism and health and wellness tourism.

Based on these axes, Marketing Greece is devising and promoting product sub-categories that aim to attract greater numbers of visitors, who will stay for longer and increase their expenditure on business or leisure travel.

Mr. Andreadis said the aim of the company’s presence in London was to develop relations with the right partners and organizations in order to promote Greece in the most effective way and ensure the country reclaims its place among the top destination choices of travelers worldwide.

Marketing Greece also had the opportunity to meet with key tourism organisations, such as Brand USA, to exchange opinions and explore the potential for collaboration in order to further enhance the promotion of Greece as a tourism destination worldwide.