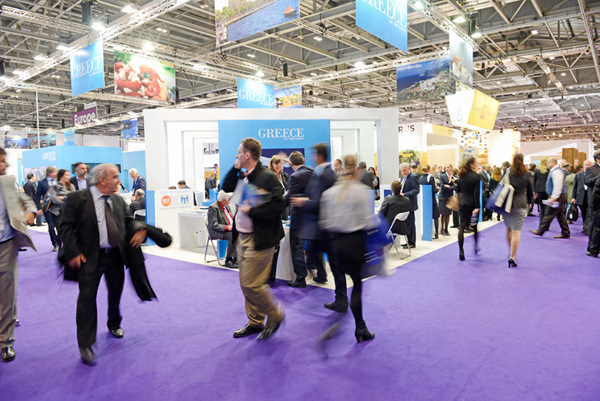 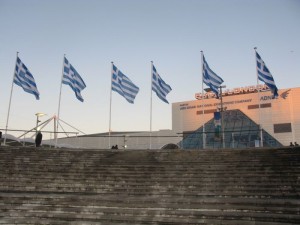 Greek flags are the first to see once approaching the ExCeL, London exhibition center to enter the World Travel Market.

Greek Tourism Minister Olga Kefalogianni inaugurated the Greek stand on Monday 4 November, the first day of the World Travel Market (WTM) held at ExCeL, London exhibition center. The Greek stand this year is dedicated to Athens and the culinary tradition of Santorini.

During her speech, Mrs. Kefalogianni referred to the great importance the international tourism exhibition of London has on the global tourism market. She underlined that the WTM leads the way for constructive cooperation and exchange of expertise. 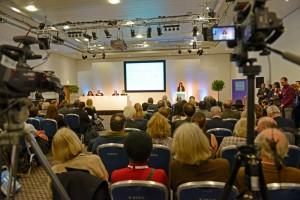 During the annual press conference of the Greek National Tourism Organization (GNTO), the tourism minister commented on the positive signs Greek tourism was showing this year.

The number of tourists to Greece in 2013 increased year-on-year January to August 2012/2013 by 11 percent – equating to an extra 760,000 foreign visitors, according to figures provided by Greece’s Civil Aviation Authority. The biggest growing source market for Greece was Russia which grew by 47 percent, followed by the USA (+27 percent), France (+17.4 percent) and Germany (+13.6 percent).

The number of British travelers to Greece between January and August increased year-on-year January to August 2012/2013 by 4.2 percent (an extra 71,443 visitors to Greece from the UK).

“We can expect even better results (next year) by promoting more aspects of our tourism product and extending the season as much as possible,” she said.

In this context she referred to “Secret Greece,” an effort being made by the Tourism Ministry and the Greek National Tourism Organization to promote the country’s lesser-known destinations.

She said the ministry and the GNTO would focus on promoting the special characteristics of Greek gastronomy, the Greek countryside, the country’s rich cultural heritage and attractive cities.

Kefalogianni promotes Greece to the UK 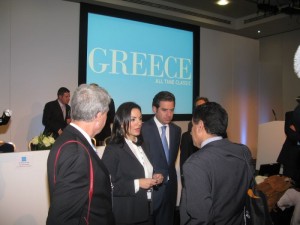 While in London and attending the WTM, Mrs. Kefalogianni held meetings with leading figures of the global tourism market and media representatives to whom she appeared optimistic in regards to Greek tourism’s progress in 2014.

During her meetings she analyzed the ministry’s plan for 2014, which mainly involves the promotion of new tourism products that target quality tourism.

She underlined that efforts were underway to develop special forms of tourism such as medical/health, religious, sport, and gastronomy tourism.

During the inauguration of the Greek stand, the GNTO screened the new promotional video for Greek tourism entitled “Autumn Colors in Greece,” which aims to extend the country’s tourism season until the end of the year.