WTM 2013: Spotlight To Fall On Athens And Santorini 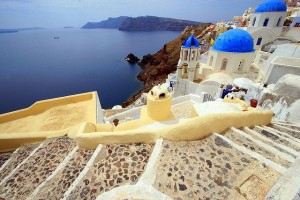 Presentations of Greece’s capital city and one of its most popular islands are scheduled to take place on the first day of the World Travel Market (WTM) 2013 in London, UK, on Monday 4 November.

Greek and foreign journalists will be informed on the Greek destinations of Athens and Santorini during the Greek National Tourism Organization’s (GNTO) annual WTM press conference.

Greek Tourism Minister Olga Kefalogianni will attend the press conference and give an update on Greece as a tourism destination, including an overview of Greek tourism in 2013, highlights for 2014, and its key goal to extend the tourism season.

International arrivals and tourism revenue in Greece are surpassing even the most optimistic forecasts as the latest figures suggest that Greece is preparing for a record year in tourism this year with 2013 expected to end with 17.5 million visitors and 11.5 billion euros in tourism receipts.

In an effort to jump-start the booking season for 2014, the Tourism Ministry and the GNTO have already launched promotional activities to international markets.

Greece Prepares To Show Its Best At WTM 2013