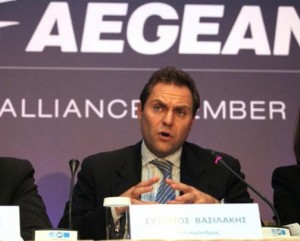 Aegean Airlines presented the benefits, arising from the acquisition of Olympic Air, for the company, the passengers, society and Greek tourism.

“Our goal is for Aegean and Olympic Air to lead in the changes of the country’s tourism market,” Eftychios Vassilakis, Aegean’s Vice-President,  said during a press conference held in Athens on 31 October.

According to Mr. Vassilakis, over the next six to 14 months, the resulting synergies of the two airlines would lead to an enhanced fleet and an immediate expansion of the network, to the enhancement of the connectivity in Greece and abroad, as well as to cost savings from the consolidation of Administrative Services, with benefits saving up to 35 million euros annually.

The Greek carrier will aim to pass these benefits to passengers with more competitive rates, enhancement of privileges for loyal customers of both companies and network expansion.

In regards to prices, Aegean has already announced the launch of two new categories of fares in economy class, the GoLight and Flex fares, with prices starting from 24 euros to Athens, which ensure money-saving and unlimited flexibility respectively. These new fares will be offered to Olympic Air’s passengers from February 2014.

Moreover, following a recent meeting with representatives of the Greek region, the company announced a package of initiatives to support the remote areas of Greece:

Kosmos Rent a Car To Participate In World Travel Market 2013